Rogers Communications will make a great case study of what not to do in a crisis, like the many hours long wireless outage that effected millions of people and businesses across Canada tonight. I can summarize the outcome of that study for you right now: ‘Do nothing, say nothing’ is not a good strategy for customer retention.  Rogers Wireless  reported Operating Profit Margin grew to 49.2% and an overall Revenue increase to the tune of $3.2 Billion in Q2 2013 reports. As a customer of their services, and an analyst who monitors their behaviours on-line closely, I recommend they pour some of those big profits in proper communications and customer service strategies for their approximately 9,400,000+ wireless subscribers to ensure their satisfaction with services before the pending Rogers Credit Loyalty Card Launch in 2014.

The company announced a loyalty program in early July in a bid to improve customer retention, noting at the time that it hoped to change the perception of how it treats existing customers compared to new subscribers, who are often aggressively wooed.

Points in the program, which is being rolled out in stages across the country throughout this year, can be redeemed for rewards such as roaming packages, Internet package upgrades and long distance for home phones.” 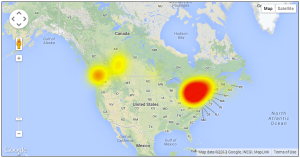 Rogers does very little to inspire customer loyalty. In fact, they frequently create more frustration for their customers than not via social channels. The incongruity of this considering they are in the telco business never ceases to astound industry watchers like myself.  For example, tonight Rogers initially reported issues with voice and some SMS wireless outages effecting subscribers in only Ontario and Quebec around 7:00 pm ET.  The Rogers.com corporate web site also went down around that time.  Shortly afterwards the Toronto Police took to twitter to advise people to use a landline to call 911 in case of emergency, long before Rogers finally updated customers via twitter that the outage was in fact, effecting their own customers nationally. As well, customers on both Fido and Chatr networks were experiencing the same issues. Services like taxi companies reported that they would not be able to process credit and debit cards as payments for rides.  This was not a small issue effecting only a few customers, nor is it the first time that Rogers has all but ignored their customers during an outage.

It might seem premature to write a post about Rogers Communications abysmal public response and lack of updates while this major wireless outage is still going on, the irony is just too rich for me. You do notice that they have ‘Communications’ as part of their trademarked brand? Rogers seems to think ‘communications’ is only something important when they can bill someone for it.  And its never been more evident than it is right now during the outage effecting customers throughout Canada.  Sadly, this is a consistent reflection of their day-to-day approach towards Customer Service on public channels. It is also entirely the same as their behaviour during another major Rogers outage in January 2013 that effected both cellular and Internet users.  Rogers hasn’t learned anything at all, or merely doesn’t care enough to alter their horrible customer relations. As BlogTO writer Chris Bateman noted during that outage, the customers anger was magnified by Rogers poor response.

Much of the rage stemmed from the lack of information from the company, possibly because it was having problems getting online itself. Messages on Twitter and Facebook explaining that customers should stop dialing its tech support lines were unlikely to have been seen by those endlessly rebooting their computers in search of a solution.”

It’s inexcusable for Canada’s largest telco to take the ‘do nothing’ approach during customer service interruptions.  Surely some of those $3.2 billion in profits could be spent on a PR Crisis Management plan? How about Customer Service training for the Community Managers?  It is a long running joke with fellow Canadian customers that their corporate twitter handle is @RogersHelps, but rarely does.  I’ve had a few responses from them myself a day or two after a few of my frequent complaints about their NextBox PVR in the wee hours when mine consistently freezes, requiring a full unplug and hard reset to fix.  But, I am pretty sure the only reason I’ve been one of those rare few to get any responses is due to the fact that I’m vocal on twitter about customer service, and not because they care about me as one of the millions of customers.  Although I outlined symptoms and issues very clearly, it was quite clear that the person behind the handle did not care enough to read carefully, and didn’t carry through with a solution, nor follow-up recommendation for further contact.  There was a very weak attempt to contact me, with a goal to shut me up, not get me help. When things like that happen with a corporate account like@RogersHelps, it simply provides more fodder for witty parody accounts like @RogersNoHelp.

Although Rogers systemic communications failures are a much bigger issue that won’t be solved without a major cultural shift in thinking by leadership, Rogers could at very least take a baby step and start with putting better people behind their social accounts, or provide better training for the existing employees responsible for public updates and responses.  Or maybe they simply need to hire people for community management who know how to walk that fine line between being snarky and being savvy. Bell Mobility won much more than just a slew of new subscribers tonight because of this outage; their Community Managers also win the battle of customer loyalty on a daily basis.

Even before the outage this evening the @Bell_Mobility social team showed a deft hand in highlighting differentials as competitors as Rogers was forced by consumer pressure earlier today to reverse their initial decision not to carry the Blackberry Z30. Then later during the outage, these wise CMs merely highlighted their own customer loyalty with a touch of humour.  This is the usual ‘corporate voice’ of Bell Mobility, and Rogers could and should learn much from their #1 competitor in this regard.  I’d have pity for the Rogers social team who will have to get up in the morning to catch up on the thousands of angry tweets sent their way, but I am doubtful that any attempt will be made to reach out effectively to the millions of effected users.  Even now as full service has been restored, this was the best they could do:

“Wireless voice and SMS services are fully restored. We continue to investigate the root cause. We apologize to our customers and thank them for their patience. We recommend customers power their devices off and on again should they continue to experience difficulties.”

Rogers has a lot of work ahead of them if they are truly committed to changing the perception about how they treat new customers versus existing clients.  They should start with a better apology for the millions of Canadians effected by the service outage tonight, and then work on hiring a top notch Communications firm. Whoever is creating plans and policies now certainly doesn’t understand the basic tenets of customer service.

Were you effected by the outage? What’s your perception of Rogers response?

“I recognize this service interruption was unacceptable for our customers,” Mr. Mohamed said. “We worked as quickly as possible to restore service and it was gradually restored over the course of the evening.”

Well, that’s a start Rogers. Now about the overall uncommunicative approach to communications during crisis…)